Senior bank executives are starting to understand that Open Banking will have key implications on their future competitive positioning and related digital transformation activities.

Open Banking is defined as a business approach in which value creation results from sharing, providing and leveraging access to bank resources through application programming interfaces (APIs). This way data, processes and other business capabilities of banks are made available to an ecosystem of (selected) third parties (e.g. fintechs, technology vendors, corporate customers)

Open Banking is set to transform digital experiences through compelling value propositions developed by third parties leveraging access to bank resources, ultimately adding value and putting the customer more in control. Banks that are able to put the required capabilities in place to effectively and seamlessly engage with third parties will benefit from an early mover advantage.

According to Innopay a strong developer portal with helpful capabilities are key to winning in open banking. While there are little precedents in banking, banks can learn from open business models that have revolutionised other industries. National Bank of Greece is a key player and innovator in open banking. We have been honored to create their developer portal with capabilities beyond any other competitor such as sandbox environments and try it out consoles amongst others. We used our beloved Drupal for this project, the best open source enterprise CMS, allowing National Bank of Greece to offer secure and controlled access to third parties in order to interact and use the bank's functionality to create the next generation of financial services.

As Innopay states: Banks that are able to put the required capabilities in place to effectively and seamlessly engage with third parties, and facilitate an Open Banking ecosystem through its platform, will benefit from an early mover advantage. This will in turn strengthen the bank’s API offering and a supportive ecosystem of third parties that drive customer value creation.

Innopay started assessing banks by their openness in March 2018 and included developer portals across the globe and triggered many positive reactions from various banks and financial institutions worldwide. Open Banking Monitor has proven to be an accessible and intuitive tool providing a snapshot of the current state of play regarding API Developer Portals and insight in a bank’s relative position. In the initial release, they have seen that the majority of banks mainly worked on ‘getting the basics right’ of their Developer Portal, rather than the Functional Scope of their API portfolio, whereas our Developer Portal had much more than just the basics.

Innopay has established some important metrics to measure and analyze developer portals quality and openness such as: 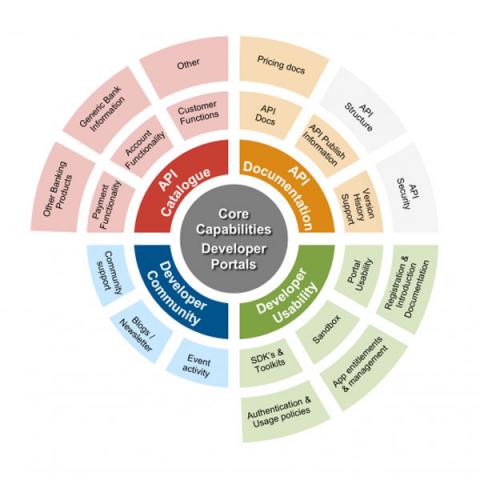 According to Innopay's data National Bank of Greece ranks amongst the top global financial institutions and is awarded with the title Masters in Openness. In Greece, National Bank of Greece was the first bank that publicly opened their Open Bank API, giving the ability to companies and startups to innovate and create apps and services that utilise bank's systems.

Through the NBG Developers Portal, developers have access to anyone willing to create or experiment with new ideas and applications. We have developed advanced functionalities such as sandboxing and try-it-out console, chatbots etc which enable developers to test and experiment with the banks APIs without using actual financial data.

If you found the article useful, help us spread the word! (just click, it's free!)

This article has: ... comments. View them and add yours! Open Comments

Get our best articles directly in your inbox!